As 2020 drew to a close and New York City prepared to deal with a second surge in COVID-19 cases, the New York State government was quietly preparing to close East Flatbush’s only safety-net hospital (ie one that is mandated to serve all patients, regardless of ability to pay), the Kingsbrook Jewish Medical Center. Eighty-eight percent of East Flatbush’s residents are Blackand 56 percent are immigrants, and the neighborhood suffered immensely under the first COVID-19 surge in the spring of 2020. In December, there was a new, more communicable strain of the virus poised to bring more misery to already vulnerable New Yorkers. Even so, the State planned to close Kingsbrook and its 208 impatient hospital beds on December 31.

Due to swift organized opposition, spearheaded by Kingsbrook workers and other healthcare professionals, the hospital remains open for the moment. But the struggle is far from over, and the lessons from the fight for the reprieve are illuminating.

A primer on NYC hospital closure

Healthcare spending in New York, like the rest of the country, has rapidly outpaced inflation. In fact, America spends the most on healthcare, as measured by a percentage of our Gross Domestic Product, than any other country on record. This was understood to be true as early as 2005, when the “Berger Commission” started recommending hospital closures. The adoption of the Affordable Care Act in 2012 increased access to health insurance while doing nothing to change the economic structures that let healthcare spending spiral. As a result, hospitals in New York City have been facing tighter and tighter budgets. One could imagine the State intervening to support safety-net hospitals financially. Instead the Cuomo administration has steadfastly refused to raise the needed funds, even though they could have easily taxed New York’s wealthiest citizens to do so. In the face of this budgetary crisis many allegedly underperforming hospitals simply closed down, a consequence of even nonprofits looking at healthcare as a commodity instead of as a public service. Since 2003, 18 hospitals have closed in New York City.

Manhattan has 6.4 hospital beds for every thousand residents; Brooklyn has 2.2. In a just world this disparity would be remedied by the Public Health and Health Planning Council

(PHHPC), the State board that oversees hospital closures, mergers, establishments, and renovations. However, the PHHPC has only one seat for consumer advocates, and that seat has been empty since 2016. The board does not widely announce its meetings, frequently fails to hold public meetings at all, and is legally not required to notify the public of its votes.

Flashy and feel-good media stories about agile government responses to the pandemic, like the conversion of convention centers into hospitals, elide the choices New York has made that forced these responses. The architects of this move continue to defend their choices even as the pandemic has laid bare their terrible human cost.

It is in this context that One Brooklyn Health System, which owns Kingsbrook as well as Brooksdale University Hospital and Interfaith Medical Center, decided to combine the three safety-net hospitals—all essential healthcare providers in their communities—into one. One Brooklyn Health is a private nonprofit group whose board is headed by Alexander Rovt, a Ukranian-born billionaire and major donor to Governor Cuomo’s election campaigns, as well as a supporter of many of former President Trump’s inner circle. He loaned Paul Manafort 3.5 million dollars and lent former Mayor Rudy Giuliani and a film crew from the far-right One America Network use of his company’s airplane in the lead-up to Trump’s first impeachment.

Four years ago, Cuomo’s administration approved the merger and promised $700 million in state funding for the construction of new facilities. In Kingsbrook’s place would stand a “medical village” that would combine housing with urgent and primary care facilities. Investing in primary care treatment is indeed a needed and cost-effective public health intervention. It’s not necessary, however, to choose between that investment and losing all inpatient medical beds at the height of the worst pandemic in modern history.

The “village” part of this facility would include privately owned affordable housing. The site, to be developed by CB Emmanuel Realty LLC, Brooklyn Community Housing and Services Inc., and Monadnock Development LLC, promises to peg housing to no more than 80 percent of the neighborhood’s average income. Internal documents estimate an average yearly income of $85,400 for a family of two, the median household size in the neighborhood.  The U.S. Census’s 2018 American Community Survey, on the other hand, estimates the average yearly income in East Flatbush at $69,986, with the median income significantly lower. Thus, the so-called affordable housing wouldn’t be affordable to the residents of the community served by the hospital it would displace. This replacement of necessary healthcare providers with gentrification-friendly apartment complexes is a pattern New York City has seen all too often.

Change started with those affected

The plan for the merger ensured Kingsbrook’s workers would not be let go. Still, as the frontline healthcare providers of the East Flatbush community, they realized the enormous injustice of closing the hospital and began to organize. They reached out to community leaders, such as Reverend Patricia Malcom of Churches United to Save and Heal. They also connected with healthcare advocates who could bring existing infrastructure to the fight— New York Doctors Coalition and NYC-DSA’s Healthcare Working Group (HWG).

The HWG began by discussing the problem and learning from those immediately affected by it. Field teams were mobilized to discuss the closure with Brooklyn residents during regular tabling events around Prospect Park. Thanks to previous work from the HWG’s field teams, and successful healthcare Town Hall events with DSA-endorsed candidate-elects, the group had access to a deep list of residents concerned about health justice. The HWG organized phone banks for hundreds of citizens to call their elected representatives. HWG circulated a petition and sent it to Governor Cuomo’s office. Dozens of organizations, including Brooklyn NAACP, signed on.

The reprieve came, but it was temporary. Kingsbrook is now staying open only on a month-by-month basis. The CEO of One Brooklyn Health was lauded for “reassuring the community that Kingsbrook Jewish Medical Center is not closing,” even though the CEO still ultimately plans to close the facility. One Brooklyn Health justifies this verbiage with a promise to invest in medical clinics. Similar promises have been made to other communities in Brooklyn, such as when Long Island College Hospital was closed in 2014. They were not kept.

With the immediate goal achieved, the coalition partners decided that  no longer would they demand the hospital be kept open during the pandemic, but rather now they would demand it be kept open indefinitely. The Kingsbrook workers’ and East Flatbush residents’ group formed committees. HWG continues to hold phone banks and flyering events. They are encouraging community organizations to sign a statement  in support of keeping the hospital open and planning demonstrations, press conferences, and other ways to harness media pressure to help achieve this vital goal. East Flatbush is not the first community in New York City whose health has been threatened by a rigid adherence to the dogma of economic austerity— but with enough voices raised together it may be the last.

Those interested in joining the fight can contact HWG by filling out this form, joining our Slack channel, or emailing us at healthcare@socialists.nyc. The Kingsbrook coalition can be reached by signing their petition or at bedsnotbodybags@gmail.com. 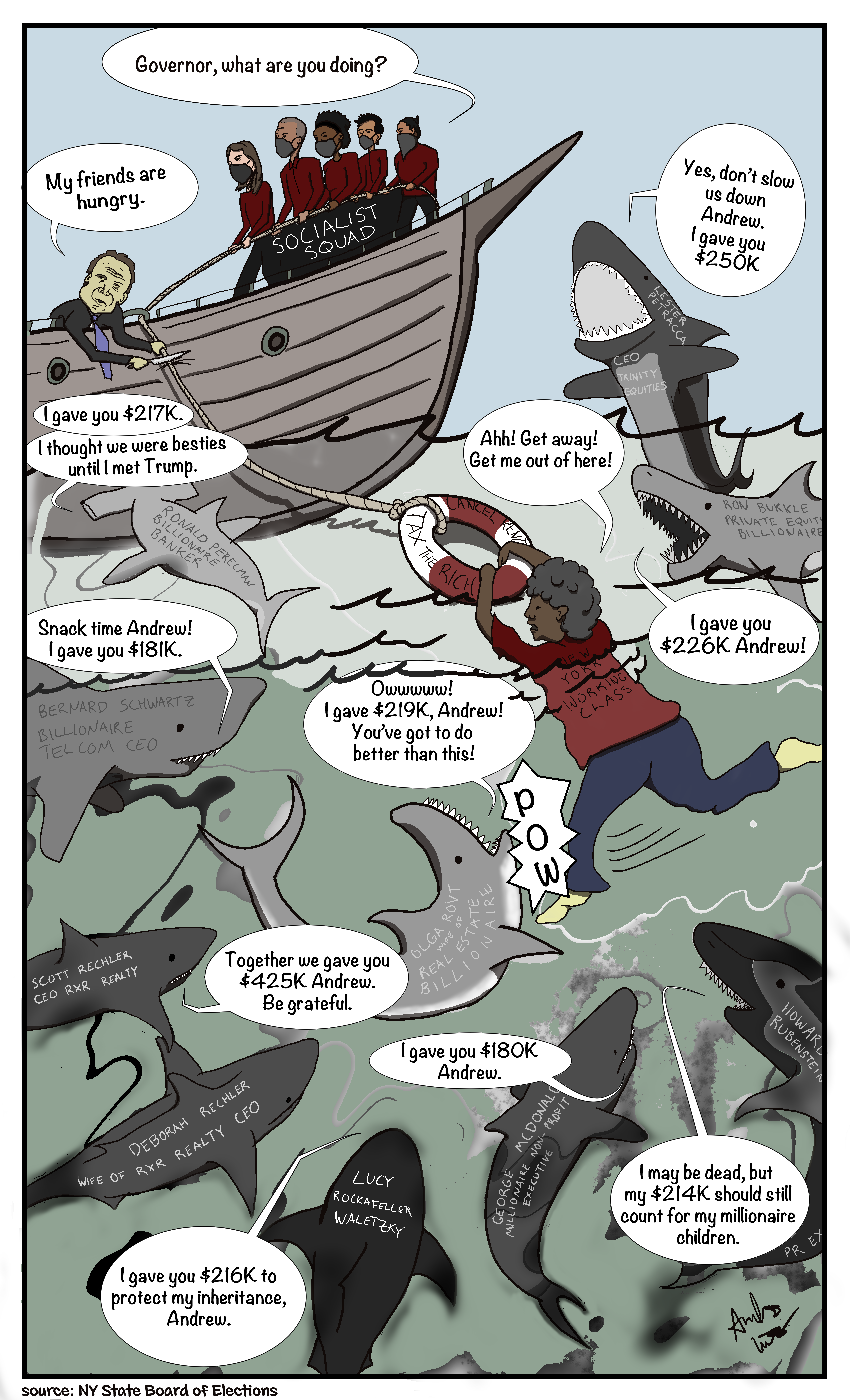